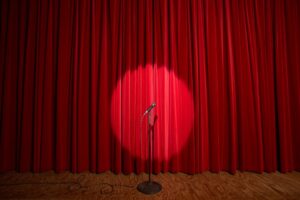 I was painfully shy as a child. When called upon in school I would feel my face burning as if someone had just opened a hot oven in front of me. I would yearn to crawl under my desk, or snap my fingers in front of my face like Burt from Soap did when he wanted to become invisible (that’s a 1970s television reference for those who don’t remember). I felt as though a thick fog had rolled in and snatched my brain and rendered me dumb and speechless, and I would speak from some far-off place that sounded something like a grown-up from the Charlie Brown specials. I could see my burning red face and hear the other kids laughing at me because I was “so red.” It infuriated me, and I believed I had no control over it. This curse plagued me well into college, when I learned to sit in the front of the classroom, thereby eliminating the whirring noise as the kids sitting in front turned to see who the teacher was calling on.

I tricked myself for days before the event, somehow managing to stuff my fears away. I would not even allow myself to take my speech out and look at it. I didn’t practice what I was going to say at all, other than how I would open, because I knew I would just speak from what I knew. I had faith that I would speak my truth, and that made it much easier than trying to memorize what I should say. Invariably when I do that, for instance, for a job interview, I get stuck on a key word that I want to use that I can’t remember and it stumps me and makes me fall flat on my face.

To say I wasn’t terrified about my speaking engagement would be a gargantuan lie.

Luckily, I remembered the scene from Maid in Manhattan, when Hugh Grant told the kid to hold a paper clip in his hand and let it act as an antenna for his confidence. So I searched my house the night before my speech to find something meaningful to hold in my hand. I even looked online for gemstones to aid in public speaking, and found that amethyst was one of them, so in the morning I put on the ring my mother gave me when I was fifteen.

I meditated the morning of the presentation and while I sat to the side awaiting my turn, I practiced calm, and made myself relax every time I felt myself stiffening.

It helped that I had Power Point slides, but I’d been told not to read from the slides. Nevertheless, I pulled it off and my boss told me afterward that I didn’t look nervous at all, and that I did a great job. PHEW!

I’ve put constraints on myself my entire life. I’ve squashed every opportunity to become successful simply by not believing in myself and by not having the conviction to carry something through to the end. Every time I got close, I would create something to disrupt that success because somewhere deep down, or from some other lifetime, it was ingrained in me that I was a failure. Recognizing this was the first step to defeating the fear and the theme of my life that I myself created. It’s taken many, many years (and I’m not disclosing how many) to see my patterns.

I have a Yogi Tea saying taped to my computer: “If you let yourself be successful, you will be successful.” I don’t know when it happened, but I finally found my voice. Now when I go out to restaurants with my husband, we sit at the bar, and we always make friends. Going out with him is tough since he can talk like nobody’s business, but somehow that almost makes me bolder. Every now and then, though, that shy insecure little girl sneaks up on me and bites me when I least expect it—until I stuff her back away where she belongs with the likes of Burt and Charlie Brown.