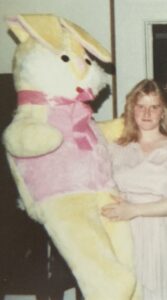 Later that semester Rhonda showed up with her brother and a friend, and we all took off on an excursion up to Vermont. Grope had just broken his ankle and couldn’t come along, so he stood out on the back porch of our apartment waving his crutch in the air and yelling obscenities at me as we were leaving. “I will never understand what you see in Camp Boy. He’s such a moron,” Rhonda razzed as we drove away. I’d had a secret crush on Rhonda’s brother Greg since I was ten years old when I first met him, so it was no surprise that we hooked up that night. We stayed in a crappy hotel that was virtually empty.

“Case the joint? Really, Dan, what are we on Hawaii Five-O?” Greg laughed. But we cased the joint nonetheless with Greg pouncing and dashing into corners like he was a spy. On our way back, we filled our ice bucket then went back to the room to party. When Dan got up to go to his room for bed, Rhonda took one look at Greg and me and could tell we wanted to be alone.

“I am not sleeping in the same room as Dan, so get that idea right out of your heads! You guys can go smooch somewhere else!”

After not getting my period the next month, I checked in with my gynecologist. When she entered the room with a blank look, I knew what she was going to tell me. I wanted to rewind, to twitch my nose like Samantha in Bewitched and be in another life in another time, or maybe just run from the room screaming while covering my ears. I could not bear to hear the next words she uttered. “You’re pregnant.” I emerged from the doctor’s office and stumbled right back into my bubble as it bounced around and ricocheted off whatever it collided with. I wasn’t even sure who the father was. What if it was Greg’s and not Grope’s? A baby Grope—scary! How can this be happening? I thought back to the day when Gina had told me about her abortion and how I fainted on the spot. When I came to, I was dangling upside down from my picnic bench with my hair tangled in the autumn leaves. It was the first time I ever fainted. I didn’t know if I could go through with that. I grappled with the urge to vomit right there on the street. I knew people were looking at me as the stinging wind blew my hair in my face. I had to tell someone, but who? I was petrified to tell Rhonda or Greg. Although I secretly wanted it to be Greg’s, I couldn’t get up the nerve to tell him since I knew he was about to go into the Air Force and was not ready for anything like a family. I was only eighteen. I didn’t even know who I was. I couldn’t be a mother. How would I even do that? So, I made the decision to let Grope think the baby was his. And I made the reprehensible choice to have an abortion. Grope drove me to an abortion clinic somewhere near Lenox.

The first thing I saw were throngs of protesters carrying signs depicting dead fetuses designed to make a woman feel like a monster. I could feel their pious arrogance poking at me like ice picks as I crossed their lines. They might as well have spit on me. I tried desperately not to look at them or the horrific signs as Grope led me by the hand. I’m pro-choice, but what the hell kind of choice is this? Do they think this is a happy choice for a woman? How dare they judge me? How could they possibly know what I’m going through? Grope sat by my side afterward, but I felt shrunken and despicable.

After weeks of missing classes and just lying on my bed, Grope convinced me to quit school and move to Lenox with him. Feeling ever much the loser, I got a job as a cashier at the local A&P, and he went off to his mundane factory job every day. That was when I discovered that everything Grope told me about his family and his past had been fabricated to make me think he was spectacular. He once told me he was taking me to his family’s vacation home, but when we got there, he said he forgot the key so we had to break in. There was something odd about it, but I never questioned him. He told me their year-round home was a mansion, and they had a pool. He talked about their dog and how he would take him for walks on the grounds. He told me he had already graduated from high school and that the class ring he gave me was misprinted with the wrong graduation date. He talked about an old girlfriend and many other crazy stories that never sat right with me, but I just chose to ignore. I wondered why he had never introduced me to his wonderful family, but eventually I found out. I started feeling threatened and trapped by him, and his temper had grown worse, with loud angry outbursts directed at me.

On a bright afternoon sometime in January, a month before my nineteenth birthday, I decided I did not want to become a statistic. I sat listening to my Pure Prairie League album for about the millionth time. I was leaning on the giant four-foot stuffed rabbit that Mom and Harold had given me for my sixteenth birthday. I had named him Harvey, of course, after the wonderful and beloved Jimmy Stewart movie. Harvey served as my couch and my only friend in our unfurnished apartment. I’m not sure what prompted it, but I got up and grabbed the phone to call Mom and told her I was desperate to leave. She sent my brother Michael to rescue me while Grope was away at work that afternoon. Michael dropped what he was doing and came without hesitation. When he arrived, I saw the pained look in his eyes.

“Did that asshole hurt you? Because if he did, I’ll kick his ass.” I assured him Grope had not touched me—yet. We did not have much to do other than to load Harvey, me, my stereo and albums, and my clothes into Michael’s van. So, without a word to Camp Boy and with my tail between my legs, I returned home to Mom. Mom never asked why I quit school and was just grateful to have me home again. Harold was still away on business a lot, so it was mostly Mom and me at home. Grope continued to pursue me after I left. He called me every night, and we would sit on the phone in silence for what seemed like hours. Mom was exasperated with it as she watched me dangle the phone from the curly cord while I rolled my eyes, just waiting for him to say something.

“Just hang up, Cha-Cha. He is not worth your time.”

One evening Grope showed up at Mom’s with an engagement ring. Did he think after everything that I would just jump at this opportunity? I always had a hard time saying no, even if I really didn’t want something, I hated to hurt anyone’s feelings. But after hemming and hawing and dancing around, I finally said no and that was the end of him.

Mom ended up renting a room to my old boyfriend Jay, who she always loved and thought of as family. It was nice to have someone responsible around. Jay loved baseball almost as much as Harold, and the two of them would sit for hours in front of the TV, cheering for their teams, Harold always with the woeful hope that just maybe the Cubs would win it this year. Sadly, that didn’t happen until many years after his passing. 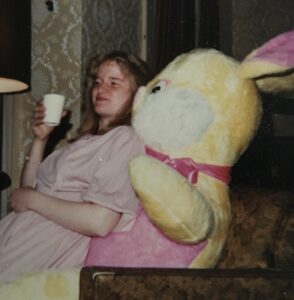 Many years later I drove with a dirty and tattered Harvey the rabbit by my side to deliver him to the Salvation Army. Tears flowed unchecked down my face after I let him go. Somehow I felt I was abandoning him, my only friend during a major time of crisis in my life. I’m sure the Salvation Army threw him out, but I just didn’t have the heart to do it myself. I like to imagine that Harvey became the delight of some other child, or perhaps served as a couch to someone in need of a soft place to land.

Excerpt from Getting Off the Radiator. Order your signed copy here