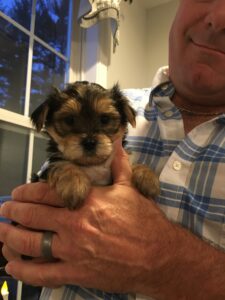 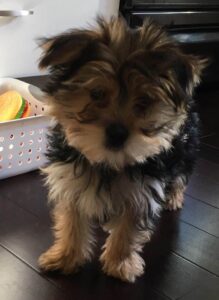 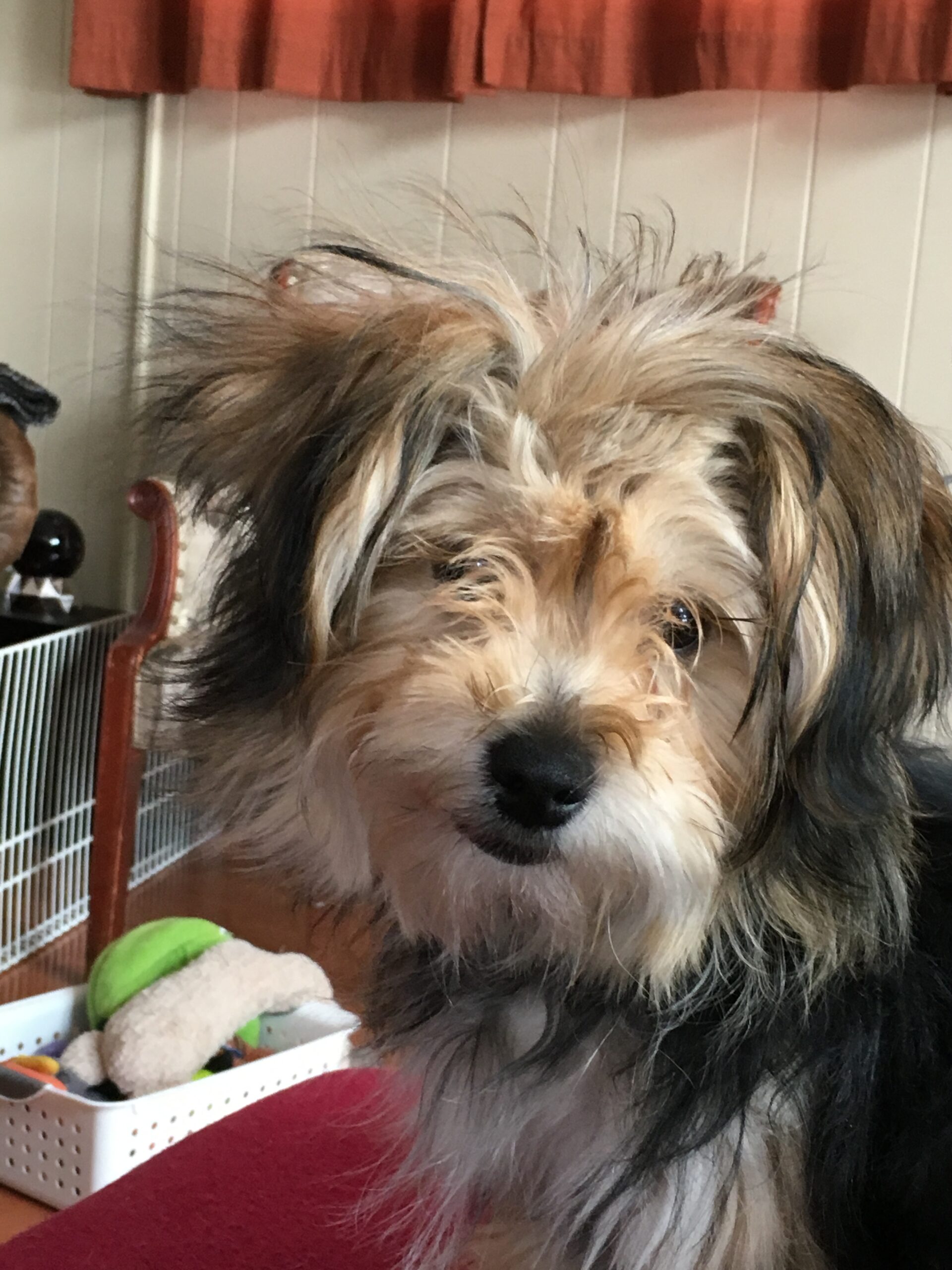 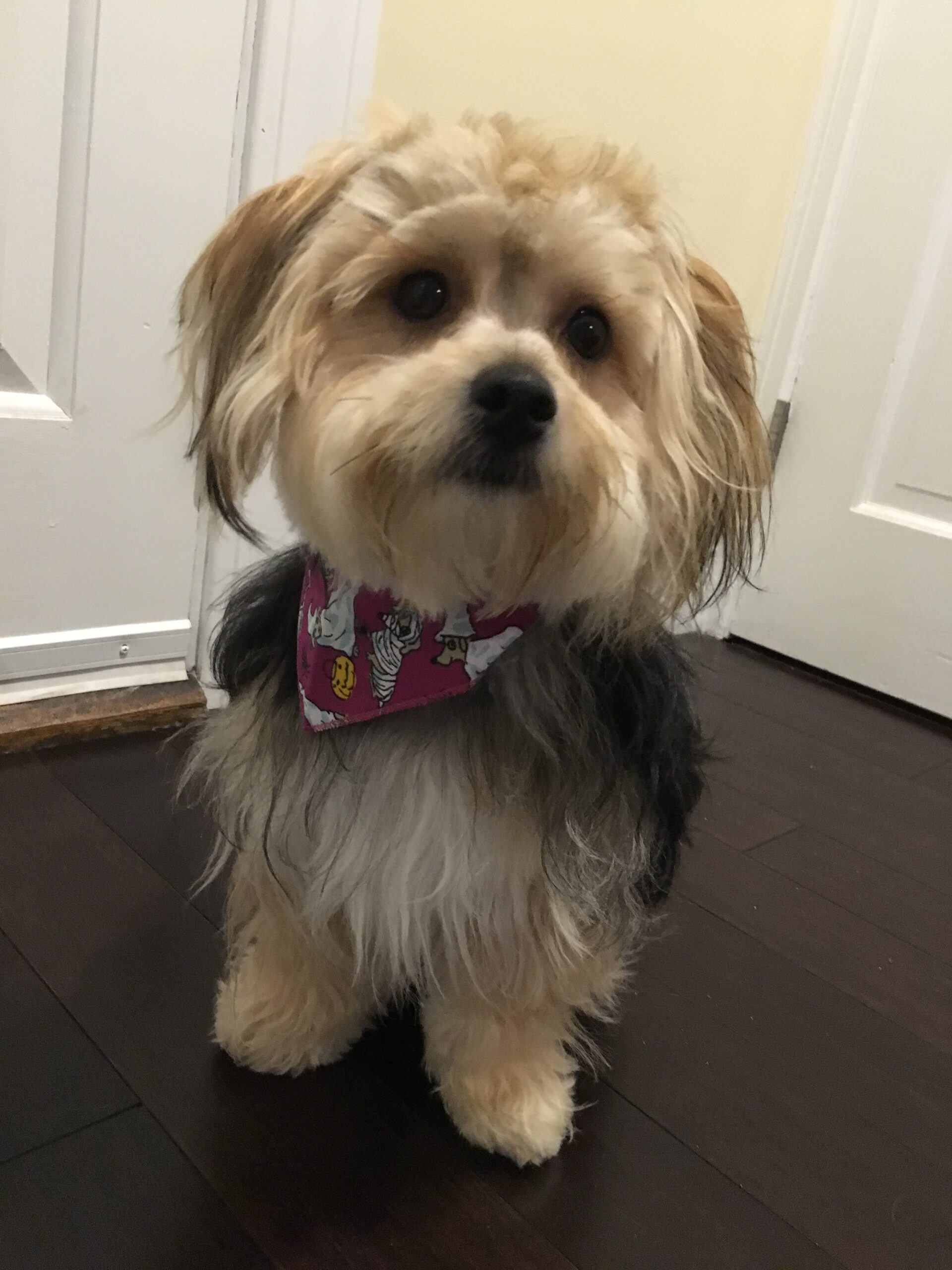 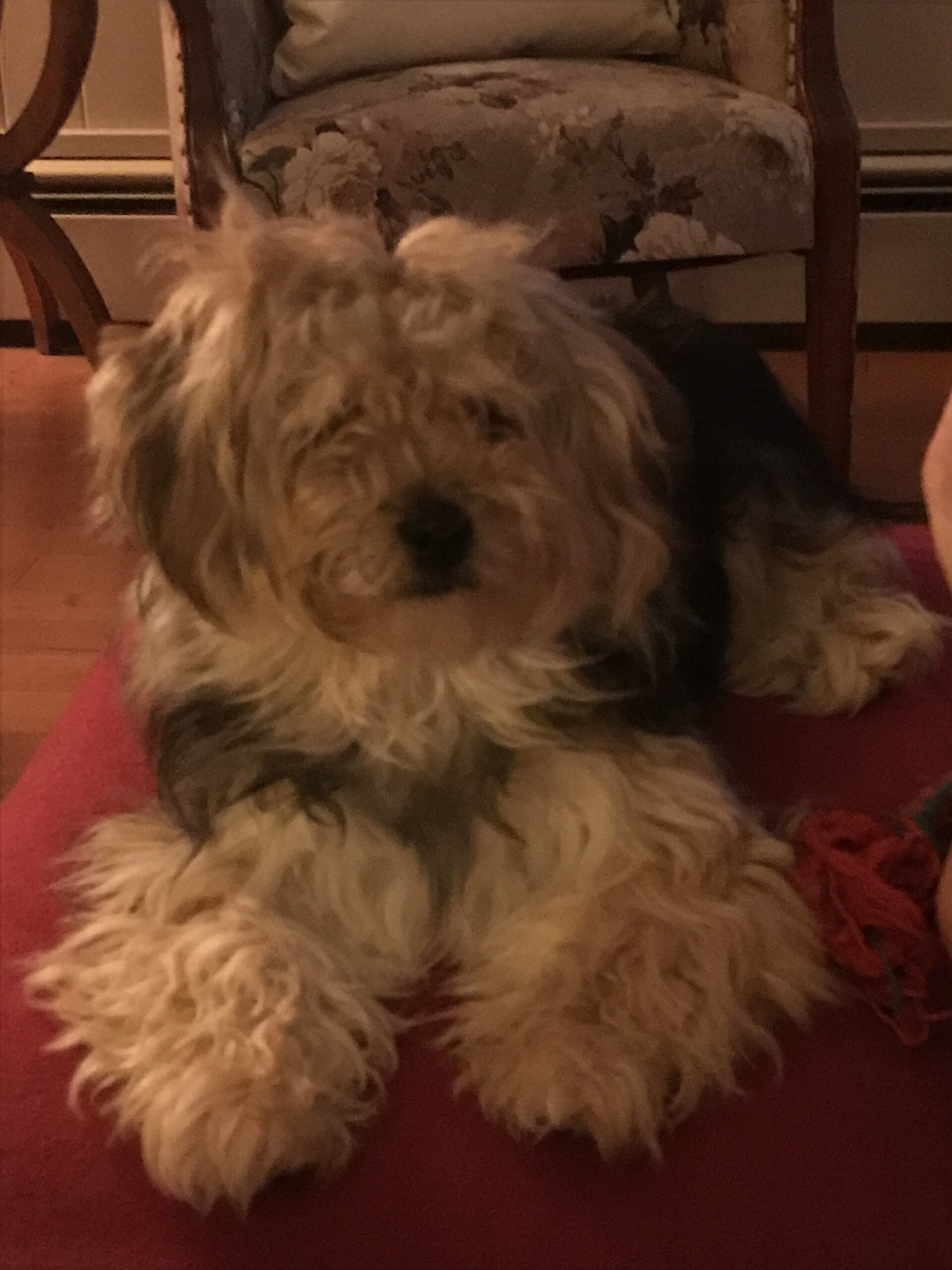 The many faces of Rylee

“I’ve always been a big dog person!“ It’s a phrase I find myself using over and over again seemingly defending myself over having a small dog. “I’ve always had Labs, but my husband wouldn’t let me get one.” I go on. I really don’t know why I feel the need to defend myself over my small dog. But I think it has something to do with my own perception of small dogs that has been etched in my mind my entire life. Scornful phrases like “yappy little dog” or “little football” come to mind.

I hate the thought of being one of those prissy Poodle owners that squeaks and preens and talks baby talk to their little dogs. I never thought I’d have to take my dog to be groomed thinking only haughty dog owners had their dogs groomed. But I was in for a rude awakening.

Our dog Rylee is an exuberant, feisty, adorable Bichon-Yorkie mix. Let’s break this down. When I hear myself say “my dog is a Bichon,” I envision a pretentious Parisian woman strutting around with her diamond studded collared dog named Fee-Fee. And then I add Yorkie to the mix and I see a yappy little heel nipper that thinks it can take on the world. Both of these breed names make me cringe a little inside. I do not want a yappy little dog, I will not get my dog groomed and have her ears trimmed and adorned with bows or studded collars. No, I tell myself, if I have to have a small dog, she’s going to be a rugged small dog, a Tom-Dog, if you will. 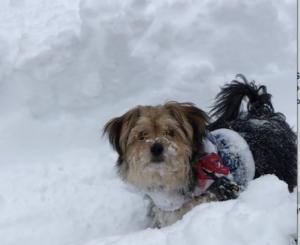 But as Rylee’s hair grew, and she could no longer see through the crazy hair that had grown around her face, and she began to develop matted tangled hair that could only be cut out, and as tiny snow balls got tangled up on her little paws so tightly that I had to blow dry her every time we went out in the winter, I knew I had to readjust my thinking. So, I found a groomer and vehemently told her to keep her “natural” looking. I only wanted her bathed and trimmed a little.

“Do not, under any circumstances cut her hair too short or ever give her one of those severe cuts around her ears,” I told the groomer. And so it was that Rylee would always come home nicely groomed, thinned out around the face and with a cute bandanna around her neck. And then one day it happened. 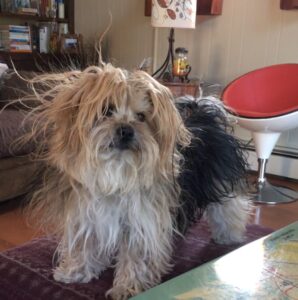 It was a hot summer day. I dropped Rylee off as usual in the early morning and handed her to one of the assistants.

“We just came from a week of camping up in Maine, so she’s a bit of a mess,” I said. “Maybe you can give her more of a summer cut. But only just a little more than usual.”

“Okay, I’ll let Julie know,” she said as she took Rylee’s leash. And with that I walked happily up the path to my car. When I returned a few hours later it was to find a Rylee that was half the dog she was—she was completely shaved but for her head—I was devastated! “What have you done?” I cried in disgust. “Oh, she’s still adorable!” The assistant glibly replied. “But no, she’s not! She looks like a little rat.” I could barely bring myself to shell out the cash to pay for them ruining my dog. I took her leash and walked disgustedly up the path thinking I’d never be walking up this path ever again. I could barely look at Rylee and she knew. Once we were home, my proud, happy little girl walked away with her tail down and slumped in the corner away from me. She could feel my disdain and suddenly I was ashamed that I made my poor sweet baby feel bad, so I began to shower her with love and compliments, and before long her tail raised and she came back to herself and began chasing, squeaking and shaking her toys in her usual frolicsome style.

A few days later, I made the decision to confront my groomer since I DID want to continue to walk up their lovely path. We spoke on the phone for a half-hour.

“Why?” was all I said when she got on the phone. She knew exactly what I meant. 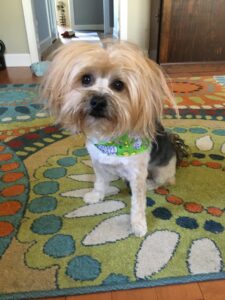 “I’m so sorry, I had no other choice than to shave her because her matts were so bad and I didn’t want her to have a bad experience. She’s always so happy when she comes here and she loves everyone she meets. I just didn’t want to ruin that. Her hair will be beautiful when it grows in, and who knows, you may even like it better a little shorter,” she added. And with that I instantly forgave her, knowing that she cared that much for my dog that she defied my instructions rather than make Rylee suffer through an uncomfortable grooming experience. It made me think of a recent post from my niece about how her vet tech was repulsed over her dog slobbering on her. In my book, anyone dealing with dogs should be the ones slobbering over your dog. After all, why are they in the business if they don’t love dogs.

It’s true I have always been a big dog person, but now I have a small dog and I can’t even stand how much I adore her!

My friend once said that she loves seeing masculine men walking small dogs because it shows that they have nothing to prove. 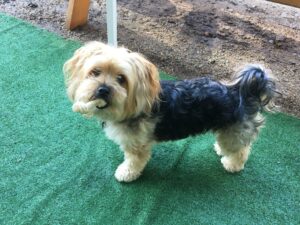 This is Rylee 3 months after being shaved. Who knew? I do love how nicely it grew in.

P.S. Not only do I squeak and preen and talk baby talk to my girl, but I sing her songs all day long as I work from home—for I too have nothing to prove!