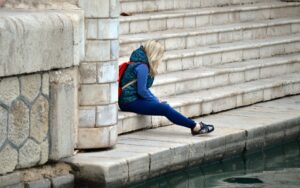 I’ve been in a good place spiritually for the past few years, and it wasn’t until—in the twilight of my life as it were—my first book was published that things started to go awry. That was when my past ghosts began to visit me again and I got caught up in some very low-vibrational pity parties where I was the guest of honor.

With a fairly diverse group of friends, not to mention a large family of whom my book’s main character focused—the matriarch of said family—it’s no surprise that I’ve perhaps offended or hurt some of those people. That said, I am trying to embrace my absolute fear of rejection which has been the theme of my life—and lately has been playing a leading role—with rejection ranging from my dog preferring to snuggle up to my husband, being “unfriended” on Facebook, invitations declined to come to my house, even my contractor ignoring me, just to name a few. I have a friend whose signature tag on her email is “Be kind. For everyone you meet is fighting a battle you know nothing about.” How true is that! How can we possibly know what others are feeling inside? So, buck up and get over it, I tell myself…

I play the part of victim so well that sometimes I forget it’s all just a story. I get so caught up in my own game of who can out-martyr who—I always win! That stubborn child that folds her arms and digs in her heels. “I won’t talk to them until they acknowledge how darn good and mad I am…” I need them to know how indignant I am—but why? I wish I could get out of my own way and stop feeling so judged. But the indirect rejection I’m perceiving from some family members is palpable. I can’t control what others think or do, so I try to roll with it and tune in to my higher self who knows it doesn’t matter.

I reached out to my best girlfriend who I knew would talk me off my cliff. She is a strong self-realized woman and she doesn’t take crap from anyone—I love that about her!

“I should be beyond all this petty crap. Am I just being a baby?” I asked her.

“F-them all!” was her response. Remember The Four Agreements: ‘“Be Impeccable With Your Word; Don't Take Anything Personally; Don't Make Assumptions; Always Do Your Best.’” She’d been teaching that in her weekly Yoga classes. I knew this in my heart, but somehow I couldn’t grasp it in the moment.

It's odd how the themes of our lives repeat no matter how hard we try to exorcise them—those old ghosts haunt us at will repeatedly throughout our lives, and either you let them affect you, or you look them in the face with courage and tell them to go away.

I live in a very hilly area; I like to equate living to riding my bicycle up a large hill. The more you look to the top of the hill ahead, the more difficult it is, but if you keep your eyes down to where your wheels are rolling, you will find the strength and courage to make it up any hill no matter how steep.

A poem I learned at a very young age comes to mind:

“Happiness is like a butterfly. The more you chase it, the more it will elude you. But if you turn your attention to other things, it will come and softly sit on your shoulder.”

3 thoughts on “Ghosts of Rejection”