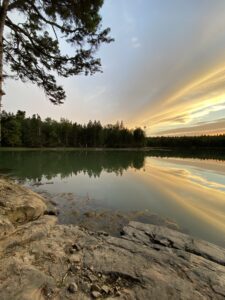 Walking by the water’s edge on the property my husband Peter and I bought 2 years ago, I was struck with a sudden sense of pride as I gazed around at the various stacks of wood and cleared areas. I laughed when I remembered the day from hell when we drove up 2 months after we bought the land—bound and determined to clear some trees and find a spot for our someday home. We sent our dog Rylee off to stay with Grandpa for the weekend and set out on the 5-hour trek to the area commonly called “Down East” in Maine.

We found a cute little Inn on the water the weekend we bought the land, so we booked a room for a couple nights. We arrived in the evening in early November, and unpacked our belongings. We sat with our wine glasses in the common area of the Inn discussing our plans for the next day—neither of us bothered to check the weather.

With the gleeful anticipation of a child on Christmas morning, we awoke to a gloomy, cold, rainy day, but nevertheless, we donned our warm clothes and trekked out to the land a few miles down the road.

Since there was no driveway or path, we blazed through the woods in the rain with chain saws, clippers and tarps. Peter buzzed at trees yelling “timber” as I scattered out of the way. I gathered the cut wood and tossed them into a pile which I later stacked between 2 trees. We did this for 2 straight days. It was exhausting. We were cold and soaked to the bone, but somehow it felt like we made a dent even though we had no idea exactly where the house would go since there are so many restrictions when building on the water. We just needed to feel like we did something.

Now 2 years later, I look at what we’ve accomplished. We hired a contractor and now have a driveway, a garage, electricity, water and septic. We have house plans drawn and we even staked out the area where the house is going to be built which is mostly cleared. But the funny thing I realized as I reveled in all that we’ve done, is that the area we were clearing so long ago in the rain, is the exact spot where the house is going. Who knew! We really had made a dent—however small—we can look back to that day when our house is finally built and say to each other “remember that weekend” And we will both know exactly which weekend.