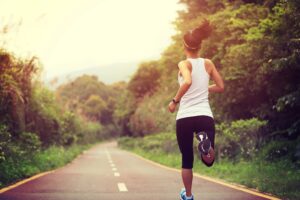 I guess you know you haven’t been running enough when you find cobwebs in your favorite running shoes.

I’ve always been pretty athletic. When I was a kid I rode my bicycle everywhere because I was afraid to get my license, which I didn’t get it until I was twenty-one years old after having my first child. That’s not all having a baby sparked in me. That was when I became a cardio junkie. It all began with Richard Simmons, and then moved on to Jane Fonda, (or Jane Bomba, as my son called her back then). I was obsessed with losing my baby fat and even worked out twice a day sometimes.

Later I moved on to the 20 Minute Workout when it was released in 1983. Those of us old enough, will remember this workout which was akin to soft porn back then, with the young attractive girls exercising in leotards and many close ups of various body parts to the tune of synthesized music. The exercise routines were demanding, high-impact and quick, so I liked them until The Firm Body Sculpting Basics with Susan Harris came out in 1986. If you can get beyond the breathy delivery from Susan Harris, it was and still is, in my book, one of the most challenging workouts, offering cardio mixed with weights for 60 minutes.

Bored with exercise tapes, I joined the YMCA and took some dance aerobic classes. But that wasn’t enough, so I took a running class in college. Since I was a non-traditional student I was about twenty-six at the time, and running became my ultimate aerobic high. (They really aren’t kidding about that “runner’s high” thing!)

Running became cathartic for me. I could run from my demons in their various forms of depression, stress, or anxiety, and it always seemed to help, until the next time I needed it. If I went more than a few days without running, I knew it. I felt anxious, like I didn’t know what was wrong with me and I couldn’t get out of my own way, until I figured out that I just needed to go for a run.

I’ve been running for thirty years now, but I’ve slowed down considerably this last year. I told myself it was because I had knee surgery on both of my knees. I blew out my right knee skiing at Jackson Hole back in 2004 and had to have two surgeries to get it right, but I recovered and even joined a running club when I was fifty and ran three 25K’s and a couple half marathons. I was still a running junkie until I tore my left ACL out in Big Sky Montana in 2014 (I think I should stay away from those mountains out west). I went on to have surgery and physical therapy and gently got back into running shape again, but my knees ached, and my husband yelled at me and shook his head every time I ran.

“Running isn’t good for you,” he’d say. But I wouldn’t listen until about a year ago. I convinced myself that he was right and that running wasn’t really good for your joints.

“I’m not getting any younger, after all,” I would say to others as I justified my lack of running. So I started walking the hills near where we live in Fitchburg, Massachusetts (which has been touted as the second hilliest city in the United States). I told myself I could do a 2-4 mile hilly walk in my neighborhood and I was still getting a “good workout.” But it never gave me that satisfying feeling I got from running. Even if I walked fast, I just didn’t get that same adrenaline high.

I had long since given up my gym memberships when I started commuting into Boston everyday due to the convenience of working out at home or just running at lunch on the Esplanade. So out came my old P90X videos, my old Firm DVD’s, (I even ordered the old Susan Harris workout on DVD since all I had was an old VHS tape) and a smattering of others, including T25. I bought the new P90X3, which is only 30 minutes long per workout (I maintain that the original P90X is still the best). Tony insists that you wear the proper shoe for each workout, so now I have a court shoe, a walking shoe, (which is really a retired pair of running shoes) and my running shoes, which were sadly sitting in the mudroom unused for months until I finally decided that I needed to run one day. Knees be damned! That was when I saw the cobwebs and I knew I had to change things. The workout tapes are fine, but they never gave me the same satisfaction I got from running, so I dusted off my sneakers (literally) and I’ve been running fairly regularly now for over a month.

I guess my point is this; don’t convince yourself that you’re too old, or that you’re injured, just get out there and do what you love…I’m going with the whole mind over matter thing, and so far it’s been working. I haven’t even had to ice my knees after a run. I’ve only gotten up to 4 miles, but most of my runs are a little shy of 3 miles, and I’m completely happy with that, especially since I have so many hills to run. At least I’m getting out there….no more cobwebs in this girl’s shoes!