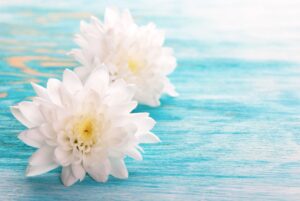 It’s never easy letting go of our loved ones, even when they have been struggling for years with a debilitating condition—even if we say it was a “blessing” it is still never easy saying goodbye.

Marilyn, my mother-in-law, was only seventy-five, but she’d had Alzheimer’s for almost three years now, and it progressed very rapidly. I’m told that one in 10 people age 65 and older has Alzheimer’s dementia. That’s 10% of the population over 65.

My husband, Peter visited his mother at the nursing home every Sunday, and he often came home with a few funny stories to share. We both knew they weren’t really funny… but sometimes we couldn’t help but chuckle.

Sometimes his mother recognized him, and sometimes she just talked nonsense, but she was always nice to him. There were stories, though, about her being not so nice to the nurses, so when Peter asked me to go with him, I was sometimes afraid. I was afraid that she’d yell at me and say something hurtful, but I knew it was time I visited, so one day we took a ride out to the nursing home. I hadn’t seen her in over a year, and to say I was shocked would be an understatement. She was half the size she’d been the last time I’d seen her, and she could no longer walk. The shock of it took my breath away, and I had to leave the room to compose myself. As I re-entered the room, I walked by Marilyn’s roommate, Phyllis. “You’re a pretty girl,” she said with a smile, then went back to fussing over the clothing laid out on her bed. I later learned that was what she “did.”

Peter held his mother’s hand and spoke gently to her, and she looked at him and called him “Dad.” It wasn’t until the nurse entered the room that she noticed me. She looked at me, then whispered to Peter, “How old is she?”

“Oh, she doesn’t like me to tell her age, Mum. Let’s just say she’s a little older than me!” Peter said.

She seemed oddly suspicious of me, which was exactly what I had feared, but then she seemed to drift away. Because of the Alzheimer’s, I didn’t know her well, but I knew she was a strong and resilient woman who had raised three wonderful children with kind and generous hearts, and that spoke volumes about the person I never truly got to know.

Sadly, that was the last time I saw her awake and speaking.

As we left the nursing home, we saw a man standing at the front desk. “I am a U.S. citizen. I am a free man. All I want to do is go out for some air,” he said. I wanted to take his arm and bring him outside, but instead we punched in the door code to leave.

“Don’t ever put me in one of these places,” I told my husband. “I know they’re here for their own good, but the idea of losing my freedom is too much.”

I got the call Friday afternoon. “Mom’s not doing well,” Peter said. It was just last week we were told that she wouldn’t make it through the weekend, so we cancelled our plans, but then she got better. My gut told me this was not the case now, so I made a beeline to the nursing home.

Peter’s sister, Lori was on one side of the bed, and Peter was on the other holding their mother's hands. Lori saw the tears in my eyes as I entered the room and looked down at their mother, and she came over to hug me. Her husband and Peter’s brother sat sadly nearby, and their aunt and cousin sat off to one side. When the nurse told us Marilyn’s temperature was up to 107 degrees, we all knew this was it, but Marilyn hung on as we sat by her bedside. “She’s always been a tough cookie, haven’t you, Mum?” Peter’s sister said, tears welling up in her eyes as she gently stroked her mother’s hand.

Just then, Phyllis, the roommate, entered the room and began rummaging through her closet. I could hear her naming each thing. “That’s mine, that’s not mine… Oh, I don’t like it when they take my things,” she muttered.

“She’s always accusing us of stealing one of her slippers,” Peter’s brother whispered. “I keep thinking I should actually take it and give her something real to complain about,” he laughed. Phyllis’s after-dinner ritual was to come into the room and rummage through her closet.

It’s a conundrum, Alzheimer’s is. Sometimes you don’t know whether to laugh or to cry. We know its victims are suffering a terrible fate, but it’s hard not to laugh about the things they say or do.

Peter’s sister encouraged us to take a dinner break. “This could go on all night. You should go get something to eat,” she said. We offered to bring food back, and asked his brother to come along, but he declined. We walked out along with Peter’s aunt.

“Sometimes they wait until everyone is gone before they let go,” she said. “So maybe it’s best if there are fewer people in the room.”

We drove to a nearby Italian restaurant and ordered some food at the bar. Just as we were finishing up, Peter received a text that Marilyn had died. We quickly got the check and ran back to the nursing home.

There was an odd sense of relief in the room. We all hugged and cried over Marilyn as we waited for the funeral home director to arrive. I knew I had bonded with Peter’s sister that night, yet I was stricken with guilt that I had pulled Peter away from his mother’s deathbed. I knew he never would have left to get dinner had I not been there, but I was somewhat consoled by the idea that perhaps she waited until he left to let go.

Afterward, I convinced Peter to write something about his mom to read at her service. He was concerned he wouldn’t make it through without breaking down, but he wrote it nonetheless. And so it was, after days of preparation and calling hours, we stood under the canopy of our grief to say goodbye to Marilyn. We gathered around as Peter bravely told a few light-hearted stories about his mother, bringing wistful smiles to everyone’s faces. He made it right to the end and only broke down on his closing statement.

At the conclusion of the service, Peter’s eldest son, who was profoundly close to his grandmother, sang “I Will Follow You Into the Dark.”

Love of mine, someday you will die

No blinding light or tunnels to gates of white

Just our hands clasped so tight, waiting for the hint of a spark

If heaven and hell decide that they both are satisfied

And illuminate the no's on their vacancy signs

If there's no one beside you when your soul embarks

But it's nothing to cry about

'Cause we'll hold each other soon in the blackest of rooms

There was not a dry eye to be seen.

I like to think that Marilyn is dancing up in heaven now and no longer in pain or confused. Somehow convincing ourselves of such things helps to ease the pain of losing a loved one.

3 thoughts on “The Slow Walk to Heaven Battling Alzheimer’s”